25 hours 40 minutes – The time in between Torres’ last goal against Genk to his first goal against Leicester. Not many teams would stick by their striker after such a drought, not many fans would continuously show their support for what has to this day been a £50million bust. However Chelsea football club and more importantly the fans have stood by Torres’ side and wished for the striker to regain some of the form that made him one of Europe’s most feared.

A long baron spell for the club must have felt like an eternity for the player himself. Cries for him to take the penalty against Birmingham were turned down by Torres, even the players appeared desperate for the Spaniard to step up. There was much of the same yesterday against Leicester. Breaking away from the back, Ivanovic found himself playing a through ball into the path of Florent Malouda, however as he turned to his right to see Torres in space, the Serbian put his hands to head in disgust at not playing him in. The crowd felt Ivanovic’s pain. It must be hard for Torres to see the eagerness for him to score from fans and players, it would surely add even more pressure to the player who must’ve felt like the whole world were on his shoulders and had very much looked like that during the majority of his time in West London. Yet it must also be an incredible motivation to know that belief in his ability has not faltered.

It took Torres 67 minutes to find the back of the net against Leicester, a game in which he had done everything but score to that point. In fact throughout his drought, there were times of great play from the Spaniard but like he himself admitted, the role of the striker is to score goals and goals have been few and far between for him since arriving to Chelsea. The goal itself wasn’t exactly vintage Torres. Raul Meireles teed the striker up on the edge of the box, before he seemingly made a mess of the opportunity with a poor first touch, he squeezed out a shot from underneath his feet which squirmed past a despairing Kasper Schmeichal dive and trickled into the corner of the net, labelled as slightly fortuitous the finish was in reality brilliant.

Queue the celebrations. Stamford Bridge erupted with noise at the sight of their number 9 scoring. Chants of “Torres, Torres, Torres” which were being sung any moment the striker found himself apart of the action were now amplified. The usual song of “Fernando Torres, Chelsea’s number 9” and the ironic “He scores when he wants” carried on minutes after his goal. What about Torres’ celebration? Apart from the huge sigh of relief he must’ve felt, he calmly walked into the net and retrieved the ball that had just seconds before rolled in, one can only imagine that he proposed to that very ball. The rest of the Chelsea team mirrored the celebrations seen in the stands, rushing to Torres and a tremendous show of unity.

If the first took 1567 minutes to come, Chelsea fans didn’t have to wait long for another. Only 18 minutes had passed by before Torres glanced home Meireles’ corner for his second. This time Torres jogged over to Meireles, finger raised with a smile from ear to ear. The crowd once again ecstatic that he found the back of the net. 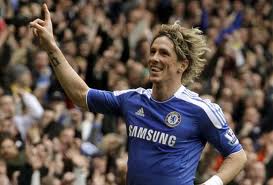 Joy at scoring his 2nd goal of the game.

The final whistle came and the crowd sounded their appreciation for Torres again. The striker had not only scored 2 goals but finished the game with 2 assists, a terrific performance even if it had come at the expense of Leicester, a Championship side. Torres turned to the Matthew Harding before leaving the pitch and showed his appreciation to the crowd before heading down the tunnel.

I’m not going to get carried away and tell you these two goals will signify the start of a series of goals, mind you it could happen. The fact is the goals came against Leicester and it was one performance, it won’t be long before the media jump on his back again if he fails to find the net in the next few matches. It shouldn’t be a surprise if he doesn’t score against Manchester City to see headlines of “95 minutes since Torres last scored”. This is why it is vitally important for Torres to build off his performance yesterday, it is always said that confidence is key for a striker and he shouldn’t be short of it following the reception he was given. Any football fan will tell you that they would like to see Fernando Torres return to form, because he is one of the best strikers in the world and thoroughly entertaining to watch when playing well.

As a final note, Raul Meireles’ performance should not go unnoticed, the Portuguese midfielder ended the game with a goal and 2 assists, finding himself playing both the pivot role and No.10 role in the second half.

As for FA Cup stats which I will borrow from 10thMar1905; Petr Cech has maintained his record of never losing a FA Cup match in 90minutes. Roberto Di Matteo has beaten Leicester on course to both his previous FA Cup winners medals as a player (hopefully adding to it this season as manager). Finally Juan Mata sadly failed to score in this round of the tournament, meaning that Peter Osgood is still the only Chelsea player to have managed to score in every round of a single campaign.